A wonderful Ewer made by Royal Worcester in 1887 finely painted in gold leaf and in fine condition , approximately 25cm tall . Please email for shipping cost. 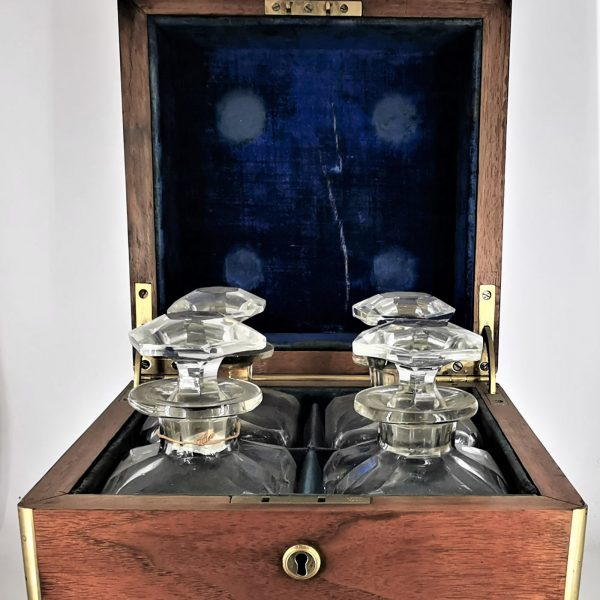 A military campaign Tantalus made of walnut and banded with brass , this last traveled to Africa and the Boer war with Lt Col Gordan Shakespeare-Higginson of the second battalion the Royal Dublin Fusiliers. Approximately 25 cm square, The box is heavy please email for shipping cost . 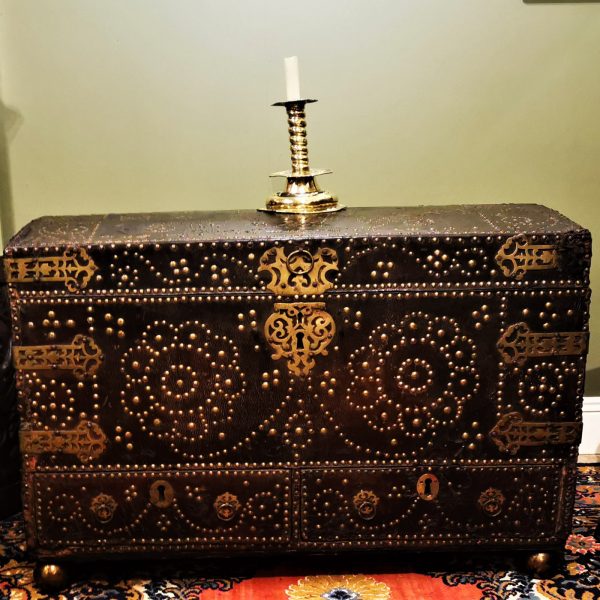 A fabulous rare 17th century Irish leather and brass studded dowry chest, dated 1693 and the letters A M on the slightly bowed top. The brass studs decorate the chest with swirls and roundels and stylised flowers. each end has original iron handles , the interior retains much of its marbled decorated paper lining. The whole chest stands proudly on fantastic Brass cannon ball feet.  We bought this about 5 or 6 years ago, we found it in a stable attached to a very big old house called Ballyrankin house near Fearns and Bunclody in Wexford, we bought all the contents of this house. It was in bad condition the bottom right drawer had a hole were the keyhole i,s about as big as a child`s fist going into the drawer and up into the main chest, it was full of 100 hundreds of thousand of very small pieces of coloured cloth that we are sure were flags most likely Irish battle flags, it had been sent to Ballyrankin from Lt Col Gordan Shakespear-Higginson of the second battalion the Royal Dublin Fusiliers on his death in I think 1928 , he had a long history of military forebears many of whom were in India, we know this was in Africa in Cape town in the 1830`s as we found in the bottom left hand corner several small wonderful water colours of Cape town in the 1830`s a small place then! Underneath them were a lot of very wonderful engravings all dated from the 1780`s to the 1790`s which leads us to believe the chest was there for quite some time we found in another Higginson box a solid silver large belt buckle also inscribed Capetown 1833.  The Chest is heavy so please email for shipping costs.

An fine and extremely rare first edition set of the Annals of the Four Masters rebound in black leather sometime in the 1980s, these sets rarely come on to the market,
O’DONOVAN, John. Ed. by. – Annals of the Kingdom of Ireland by the Four Masters Published in 1848  and 1851. by Hodges and Smith Dublin.
O’DONOVAN, John. Ed. by. Annála Ríoghachta Éireann – Annals of the Kingdom of Ireland by the Four Masters. From the earliest times to the year 1616. Edited from manuscripts in the Royal Irish Academy and Trinity College Dublin, with a translation and copious historical, topographical and genealogical notes and with special emphasis on place-names.  Five heavy and thick  volumes. Dublin: Hodges Smith, 1851. Quarto. Over 4,000 pages’,  Spine divided into five compartments  with gilt raised bands, title and volume number and date in gilt
The Annals of the Kingdom of Ireland, Annála Ríoghachta Éireann or the Annals of the Four Masters to give them their best known title are the great masterpieces of Irish history from the earliest times to 1616 A.D. The work was compiled between 1632 and 1636 by a small team of historians headed by Br. Michael O’Clery, a Franciscan lay brother. He himself records: “There was collected by me all the best and most copious books of Annals that I could find throughout all Ireland, though it was difficult for me to collect them in one place”.
It is generally accepted that the Annals were written in the Franciscan convent of Donegal, which at that time was situated on the bank of the Bundrowes river where it forms the county boundary between Leitrim and Donegal.
Brother Michael who was chief of the Four Masters was born about 1590 and was a descendant of the illustrious and learned family of O’Clery which originally came from Tirawley in North Mayo. For three hundred years the O’Clerys were scholars and professors of history to the O’Donnells, chiefs of Tír Conaill, and their home and school was in Kilbarron castle scenically located by the shore of Donegal Bay, a few miles north west of Ballyshannon. Brother Michael was baptised Tadhg and in his youth was affectionately called `Tadhg an tSléibhe’ or Thady of the Mountain. In 1623 he joined the Franciscan Order in Louvain. His superiors soon recognised his talent as a historian and antiquarian and sent him back to Ireland in 1626 initially to collect what he could on the Lives of the Irish Saints and later to begin work on the history of his native land. To assist him in this enormous task he chose three assistants; his cousin Cucogry or Peregrine O’Clery, Fergus O’Mulconry from County Roscommon and Peregrine O’Duigenan of Castlefore County Leitrim. Michael’s brother Conor and Maurice O’Mulconry also assisted in the compilation of the Annals. The title Four Masters was first used by Father John Colgan in the introduction to his Acta Sanctorum Hiberniae which was published in Louvain in 1625.
The great work remained, for the most part, unpublished and untranslated until John O’Donovan prepared his edition between 1847 and 1856. Its crowning achievement is the copious historical, topographical and genealogical material in the footnotes which have been universally acclaimed by scholars. Douglas Hyde wrote that the O’Donovan edition represented: “the greatest work that any modern Irish scholar ever accomplished”. More recently Kenneth Nicholls says:
“O’Donovan’s enormous scholarship, breathtaking in its extent when one considers the state of historical scholarship and the almost total lack of published source material in his day, still amazes one, as does the extent to which it has been depended on by others down to the present. His translations are still superior in reliability to those of Hennessy, MacCarthy or Freeman to name three editor-translators of other Irish Annals … his footnotes are a mine of information”. A very attractive  set of this monumental work.
This set is extremely heavy please email for shipping cost.
Categories: Books, Old Irish, Irish, Irish History
Read more

A rare book of Irish history , first edition , Dj a tad faded with dust staining ex lib numbers on the base of spine of dj, numbers again on book spine with gilt titles and embossed gilt stamp on corner of board, book plate of the Manchester Free Library on fpd small stamps on base of title page & each plate otherwise the book is in wonderful condition 487pp. good dj with removable protector hard back bound in green cloth with 16 fold out maps and plans  1.3kg please contact for shipping cost. Rare  645 euro

Another Rare Kerry history, Hardback  Bound in green buckrum with gilt title name and printers on the spine also with library numbers in white, on front pastedown is a rather fine manchester library stamp and some numbers in pen the first few pages are slightly cockled at the top possibly caused by damp or water some years ago but not stained at all,some library stamps through out and on the back of photos book is very slight loose all that said a very good very scarce book, published by the Kerryman in 1931, 8vo / JP56/  656 pages / 1kg

A fictional romance set in the year 499 Binding and contents are very good bound in a light green cloth with red title label. 682pp. published by Macdonald in London 1951

Create a Flip Book for any product category. You can also select custom posts.